Serina Sep 26, 2015 Leave a Comment
Having teamed up with Visit Florida last month as a partner and ambassador, Pitbull goes with the tourist board from Florida to Fulham. Always one for ‘sharing and caring’ Mr Worldwide spreads some sunshine into London with Visit Florida as the main sponsor of London’s oldest football
Club- Fulham FC (soccer to my friends across the pond!)
Earlier Pitbull tweeted a photo of the Fulham kit with the number 305 (obviously!) on the back as a thank you to the club.
Joining up the dots for those scratching their heads at the Putney End and outside the club trying to working out what, why, how at this sponsorship could even be conceived?  Fulham FC’s owner and Chairman Shahid Khan is also the owner of the Jacksonville Jaguars – Florida which is also his home and so seems like a natural alliance. (See what Shahid Khan and Chief Marketing Officer of Visit Florida Paul Phipps had to say about the sponsorship deal by clicking on the link below and find out more about Fulham Football Club) 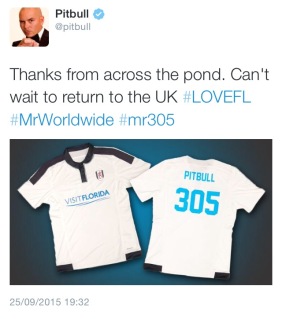 See the Visit Florida distinctive blue logo on the players home, away and third kit- whether you’re freezing and supporting the home team from the Riverside, Hammersmith or Johnny Haynes Stand as a reminder to book that holiday to a warm and sunny Florida where as Pitbull says are full of ‘sexy beaches! Hotels!’  There will also be presence of Visit Florida on the roof of Fulham FC’s home and stadium Craven Cottage at it’s Riverside Stand end as well as on the landing approach from London’s Heathrow Airport.
In a twist to Mr Worldwide’s lyrics “cooler than a polar bears toenails..come play with the big (London) boys in the Premier League!”
Good luck to the Cottagers and Lilywhites on Tuesday against the Wolves!
So the question now is where to put Pitbull? Goalie? midfield, defence, forward?  (Do we need to explain the offside rule?)
Dale!
VisitFlorida.com
Fulhamfc.com
http://www.fulhamfc.com/news/2015/august/07/welcome-visit-florida