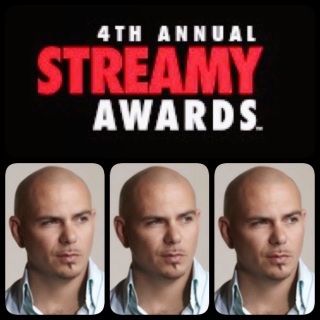 Congratulations to Pitbull who received a Streamy ICON Award in the fourth annual Streamy Awards last night. The highest honour given by the Streamy Awards. Receiving this particular ICON award (yes it is still in CAPITAL LETTERS as it is such a huge deal!) is ICONIC within itself as it is the FIRST year an ICON award has been presented. An award which is given to exceptional individuals in recognition of their demonstration of leading the way in online video and entertainment.

Streamy by name and streamy by nature, the award show itself was also streamed LIVE and could be watched as it all happened on Pitbull’s Youtube.

Activism, convergence, entrepreneurship, and inspiration are the four categories in which the Streamy ICON Award honours talents. Pitbull has been given recognition under the convergence category. “No other artist in the world better represents the current convergence of digital and traditional media than Armando Christian Pérez, aka Pitbull” say the Streamys (we agree!, although it could be argued that Pitbull crosses into many of the other categories one way or another whether in the current context or with further expansion)
Pitbull is renowned for always being the innovator, straying away from the norm, doing things differently and challenging ways and means. Very well deserved and I’m NOT saying that just because I’m a die-hard fan. Recognition given where it’s due! Congratulations Mr Worldwide!
Seems that Pitbull is ahead of the plan for the next two years and already making history and causing some disruption of the welcomed kind!
Click onto Pitbull (any one of him will do) and revisit Mr Worldwide’s reaction to getting an ICON award.
Dale-YeeeYAW!
Serina