UNCLE LUKE SENDS A MESSAGE TO THE #PITBULLGIRLS 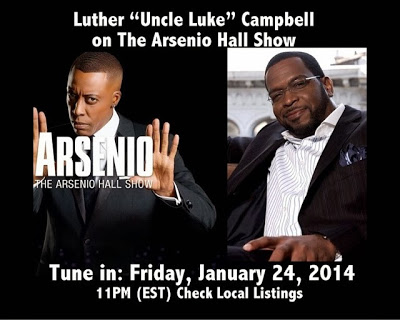 Embedded deep in the roots of Pitbull history, Luther Campbell is the man who originally saw the talent, spark, passion and potential in Pitbull.  Took the young puppy under his wing and signed Pitbull onto Luke Records thirteen years ago and put Pit through his paces at Luke’s School of Hard Knocks whilst being a friend and mentor at the same time.

Last night, better known as Uncle Luke and veteran rapper Luke Skyywalker in rap group 2 Live Crew was internationally known for multi platinum song ‘Me So Horny’ was on the Arsenio Hall Show last night talking about Pitbull and his upcoming ventures. Social networks went into a  ‘Pitbull Global Meltdown’ frenzy of support, love and appreciation from all corners of the world for the guru that believed in and introduced us to Pitbull. Sending love right back at the #pitbullgirls, Uncle Luke gave what you may call an exclusive ‘2Live-Vlog’ posted on Pitbullglobal.com with thanks to Cassandria Arnaz for the message and also extended thanks to Angel Rodiguez of AER Management of which Uncle Luke is a under.
Don’t you worry Uncle Luke, #pitbullgirls got you, we got Pitbull too! Thank you for taking a chance and nurturing, believing in, giving a break to and steering that little pup in the right direction which gives the world a superstar icon that he is today!
Dale EeeeYAW !
Serina
WATCH UNCLE LUKE’s MESSAGE TO THE #PITBULLGIRLS