PITBULL GOES FROM DADE TO DESI! 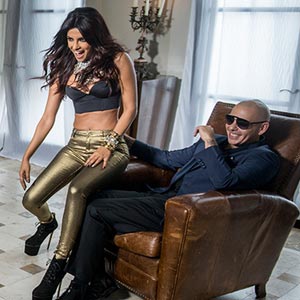 This is what happens when you mix Indian with ample sprinkles of Cuban American -you get Exotic (enough to give a bowl of mangoes and papaya an inferiority complex) All the teaser promos of the Exotic video certainly did not disappoint. Mr Worldwide teamed up with former Miss World and Bollywood beauty Priyanka Chopra creating one sexy ‘masala mojito’.

From Dade to Desi, It’s impressive that Pitbull knows what the phrase Desi means. Predominantly in English, Priyanka throws a little Desi mirch into the mix with some Hindi and in my best attempt to try and translate sings, “When I saw you, you took my life. This foreign guy has tamed/taken/made this Desi heart understand”Filmed in Miami and directed by Emil Nava the video begins with a gorgeous care free Priyanka basking around in the ocean among the sounds of the sea and seagulls but that soon changes in a quick hair-flick, realising she needs more cooling down because of feeling so hot and exotic and so makes her way to meet Pitbull somehow (don’t think that’s going to cool you down!). From dancing with Mr Worldwide in a skin tight metallic gold dress, Priyanka disappears for a while to let Pit kick back with ‘boat loads of women’ situated around his chair and popping in and out, kicking the rest of them out to sit solo on the arm of his chair singing away whilst Pit immerses himself in the moment and beat. The video, progresses to a pool side with the former Miss World in a funky old school neon beach top and black high waist hot pants and shocks us by strutting straight into the pool with her shades and studded pink stiletto-ed shoe-boot still on. What the?! Reports suggest that custom made Louboutins were made for the shoot and more than just one pair (I’d love to see Christian Louboutin’s face when he saw the video at the point where she walks out of the pool wearing them, oh Mon Dieu!) Night dawns and Priyanka gets her girls to do a bit of ‘group-dancing’ amongst palm trees and a bit of misty greenery. I love the part near the end with the ladies sitting down and busting out in upper body Bollywood dance moves. (Spotted the Tia Maria but looking around for the Voli in the Bolly!)Priyanka was sexy, sassy and her usual sultry self, I’m surprised that it wasn’t Pitbull that needed cooling down in the ocean. Priyanka’s vocals were exceptional too (I didn’t know she sounded THAT good!). Top producer RedOne produced this Exotic and infectious number and has bagged the job of producing the rest of her album.Even if Pitbull says he can’t dance (I’ve seen you bust out in some Cuban salsa steps on stage Mister!) this song and video has a lot of Bollywood flavour which means lots of dancing, locations and unprecedented amounts of costume changes and we did see a fair bit of that going on too. Talking of costumes and styles, I was drawn to a colour I do not think I have seen Mr Worldwide in before and am loving the blazer with a touch of teal which really complimented Pitbull. Que RRRRIIICO!Worldwide by name, worldwide by nature. Pitbull is always pushing boundaries in music, fashion and business. It’s not common knowledge that Pitbull was known and played in the clubs of Mumbai years before he was recognised in the UK (while I was being every DJ’s nightmare rolling up to them relentlessly requesting that they play Culo to make me go away!). With this recent move into dipping his toe into Hindi music and performing at the IPL, I wouldn’t be at all surprised if we saw an appearance in a Bollywood movie. I really do believe that there is a HUGE market for our Pit there in terms if brand endorsements especially (Reliance, Tata where you guys at!)Pitbull has his usual attention grabbing play on words in the song and I randomly thought I’d have a go so here is my freestyle (humour me!)“Like Bon Jovi they want you ‘dead or alive’..We love your energy, spirit and drive..Your music is our drug on which we thrive..From Dade to Desi reppin’ the 305!”On that note, I scream “Cool me doooown” The video was too hot and I think the lyrics hit it the nail on the head at “If you wanna see the world, I suggest you come with me” Hey Pit! Wait up!Dales EeeeYAW!