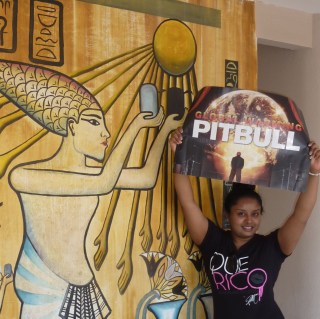 As I stand holding the cover of the seventh wonder of Pitbull, his seventh studio album in the home of one of the seven wonders of the world which is Egypt I ask you “CAN YOU FEEL THE HEAT?!!!”
With the constant warnings of an oncoming Global Warming, the time has finally arrived. The build up and PMT (that is not Pre Menstrual Tension but Pitbull Music Tension!) to the climax building up to the release of this blazing album was enough to make you feel as though you will spontaneously combust into flames of excitement. May I suggest that you change into your bikinis, mankinis, shorts, speedos or whatever floats your boat. It’s the only attire suitable to be able to cope with the heat coming out of this album.
Pitbull has out done himself and raised the bar once again.  We expected nothing less from our genius.  Global Warming is one big party album with numerous anthems that are guaranteed, yes guaranteed to burn the dance floors all over the world. It’s packed full of sounds that went straight through my ears and down to uncontrollably activate my hips whilst simultaneously tantalising and teasing my brain with traditional Pitbull lyrics that we all love and enjoy so much. It truly is a bag of treats and features artists such as Havana Brown and TJR to name a few. It would be absolutely criminal to choose a favourite or even top five songs on the album without the music police coming to arrest you. It’s simply not possible.
Mr World Wide with all his charisma and charms has even managed to pull out a genie in a bottle for his seventh album on Feel The Moment where he collaborates with Christina Aguilera and being an eighties kid I was delighted with the samples of Take On Me by AHA (Morten Harket should be proud!) which was so unpredictable and headed straight at you with Pit reporting live from the tallest building in Tokyo.
The Party Ain’t Over until you’re so f******g drunk or at least until Pitbull says so! Look out for this infectious track featuring Usher and Afro Jack. We have a ladies anthem that is Drinks For You with J to the L.O where the second verse praises single mothers who work hard to make ends meet and not forgetting to pay tribute to his very own mother as well as those that are innovative or with power (meet you at happy hour?)
To The Wanted I’m ‘glad you came’ to make an appearance on Have Some Fun. This song right here is another example of what I’m talking about. How Pitbull and his producers incorporate samples of songs that you couldn’t imagine that would be used let alone work. Here we have Cheryl Crows All I Wanna Do. I would love to get into their minds of how they come up with thinking of these and get in the ad hoc studios on the go with them to watch it all come together. There are so many samples in this album and when you’re so into your music it’s even more of a pleasant surprise and enjoyable to pin point them as they come through on the various tracks. (Question: Anyone else at the edge waiting for some more of the Macarena to kick in as they listened to Global Warming featuring Sensato?)
We all know that Pitbull has a tongue that is bilingual and just through the speakers his lyrics alone are ‘ready to play with the spot where you tingle’. The original get down and dirty Mr 305-World Wide lyrics are back, blatant and RAW as ever and all over the album!  So just surrender and let Pitbull and Enrique  ‘f*** you blind’ with these lyrics and let them have your Tchu Tchu Tcha!
Predominantly a party album we have songs that also clutch a little at your emotional strings at the same time such as Get It Started with Shakira, Hope We Meet Again featuring Chris Brown, Last Night with Havana Brown and then we have Outta Nowhere featuring and produced by Danny Mercer accompanied by our favourite White Boy Wasted Jamie Drastik also not one to be missed. Who am I kidding? Nothing is to be missed!
Global Warming is an essential for any party. Ensure you do it justice and make sure it ain’t over, even if it’s 3am…Que no pare la fiesta!
I very much agree with a recent interview with Pitbull and can understand how his music has changed the climate around the world when it comes to talking to people in the universal language that is music. Changed the game for the better and am grateful for the fact that people are able to loose themselves for a while into his music no matter where they are on the globe and what their circumstances may be. Mr World Wide you truly have the ‘globe in the palm of your hand’ with this album. Congratulations and THANK YOU for the music and just being who you are, what you do and teach through your lyrics from all of us fans.
Ok let’s not get too serious now…I’m starting to get drunk on Global Warming (hiccup!), come on catch up with me guys…
My name is Serina and I am a PITBULLAHOLIC, please don’t try to cure me.
I’M OFF THAT? Hell no, Global Warming..I LOOOVE THAT!!!!
Dale YEEYAW!