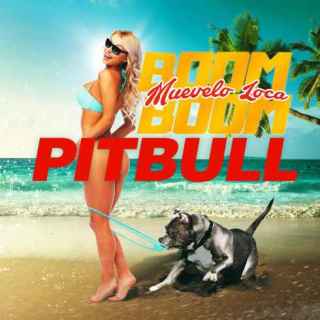 BoOm! Can’t stop, won’t stop playing Pitbull’s new single Muévelo Loca Boom Boom. The snippet of the song had me hooked since October when Pitbull teased us a few months ago at the Latin American Music Awards, craving to hear more!
Another infectious, high-energy banger from Mr Worldwide. That Friday feeling just got taken to the next level with a simple but effective chorus and captivating hook.  A track with global appeal – hold tight world and don’t worry if you don’t speak Spanish as ‘Pitbull will put the Spanish in you.’
A much welcomed assault and loss of control of my hips and invasion to the ears from all directions straight off from press play!
From being a dancefloor filler as Pitbull says “All up in the club like..”  To being staple in recent Zumba choreography, here’s hoping it’s heard somewhere on the ocean between Miami and the Bahamas on the Pitbull Cruise 2018 too.
Single cover a Pitbull ripping off the bikini bottoms to bare that culo – very fitting!
Out everywhere! Google Play, iTunes, Amazon, Spotify to constantly ringing in my head!..BoOM BoOM, dale mamacitaaaaaa..BoOm BoOM
Dale!