Serina May 8, 2016 Leave a Comment
Keith Urban’s Sun Don’t Let Me Down produced by Nile Rodgers has Pitbull on board the track with his seductive and playful rhyme and tones. Country keeps pulling Pitbull back and I just love that!

The song is featured on Keith Urban’s latest album Ripcord – a ripcord defined as a cord pulled to open a parachute. Urban went straight in with the risk of different artist sounds with a Mr Worldwide collaboration amongst others and obviously the parachute opened with a pleasant sound as it glides through the sky to reach the ears of listeners worldwide. Sun Don’t Let Me Down. Cross-Country, Cross-genres and Cross-ability to connect with different audiences.
Let’s break it down further. There are four key similarities and connections which stand out between Keith Urban and Pitbull.
Firstly, as Keith Urban finishes a new song Gone Tomorrow (Here Today) for his latest album his thoughts are with his father and father-in-law who had passed, and although this song is not the Pitbull collaboration it demonstrates shared values between the two of living in the moment. As Sun Don’t Let Me Down about feeling the moment too before the night ends. 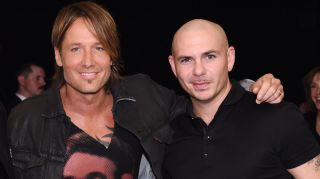 Secondly, the direction in which Keith Urban was going with Ripcord of diverse sounds and collaborations rings true to what Pitbull does with his albums and music.
Thirdly, they both take risks with their music and diversity of collaborators.
Fourth, they both love a bit of Country!
Pitbull claims the intro and makes his presence on the track very clear with his signature introduction of the artist Keith Urban and himself Mr Worldwide, going on to “They say life is short so ‘imma live it up. Tonight it’s goin’ down (just like in another one of his Country spins- Timber!) ‘Till the sun comes up. Dale!”
Upbeat, feel-good, a little reflective. A little romantic twist from Keith’s story and meaning behind the song “Sun Don’t Let Me Down…she’s almost in my arms right now” not wanting the night and moment to end so soon as sun needs to come up at some point. I hope the sun didn’t let you down and you got the girl Keith!
I think there could be a pretty cool summer night party on the beach with fairy lights linking the tree’s in the background. The video playing out Keith’s story while Pitbull out having fun with the crowd dancing away and Voli Vodka flowing freely. Keith obviously get’s the girl and then the sun rises in the background without letting him down and Pitbull? Well he’s over somewhere pulling some hair after some ‘truth or dare’! (where do I sign up for the video directors seat please?)
Life’s short so please can somebody fill our cups too with “Voli, water and lime” while we listen to the song below too, what do you say #PitbullGirls?
Dale!