If you were in two minds about joining the Pitbull Cruise next year on the Norwegian Pearl Cruise Liner, chances are you would have made up your mind to jump on board and go and have a good time after watching Pitbull’s new Freedom video.

Sailing on a long-loyal ship steering through Pitbull’s career since the release of his very first album – and I could be speaking for quite a few similar passengers on the journey who are aware of Pitbull history, what made me really smile is watching the kids sitting on the rocks by the ocean at the beginning comparing trainers and talking how kids do. A mini-Pitbull in his long shorts and white vest being made fun of in jest by his friends responds “One day Lil’ Chico gonna be big. Imma be kicking out one of those big boats one day, you’ll see!” As he points to the Norwegian Escape Cruise Ship pulling out of the Port of Miami.
In the next shot, we could say fast forward to today and we see Pitbull on the deck of the Norwegian Cruise Liner taking his Freedom and being free doing what he wants and having a good time!
The beautiful Most Bad Ones and other great ladies look stunning flying flags from USA, Cuba, Brazil, Spain, China, Australia, Bahamas (where the Pitbull Cruise 2017 will be heading)

I’m going to leave the proudest one with a shout out to Kristin for representing my country-the Union Jack flag of the UK (now just steer the boat towards us Captain Worldwide). Not only did the lovely ladies swish away on top of the deck waving the big flags in the wind but they had the bikinis to match.

As well as the obvious Norwegian Cruise Liner written in bold along with it’s official logo, the video continues with more subtle and subliminal product placement and highlights how the features and facilities on board the cruise liner can be enjoyed. From the casino, dance floors to pools and spa…or go and have a good time like the flirtatious fun going on elsewhere between the mami who eventually puts her room key in the gentleman’s suit pocket. (anyone seem the old Carry On Cruising show in the UK? This sounds like the classier version)
From port to starboard, the video captures that refreshing carefree and fun feeling with it’s vibrant colours a ‘commercial-video’ video for the Norwegian Cruise Line.
Every day on the ocean is a good day too, hey Pitbull! We can get on board by joining Mr Worldwide and The Most Bad Ones on the ‘After Dark Party’ Pitbull Cruise. Don’t forget your Party Patch!
Dale!
FREEDOM SONG REVIEW
PitbullCruise.com
NCL.com
WATCH FREEDOM
..NOW ENJOY MORE PHOTOS! 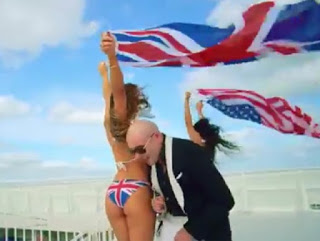 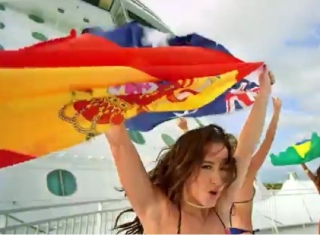