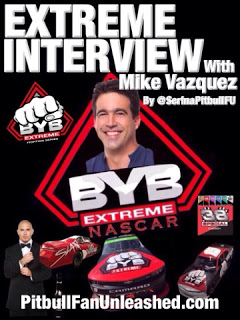 From NASCAR and breaking into an untapped market, Mike Vazquez talks about being part of a huge movement and formulating the first ever Hispanic owned racing team (Hispanic Racing Team – HRT) Created by Hispanics, driven by Hispanics. Representing the Latin community on the track and then going onto creating FCV Racing.
With a portfolio almost as varied as Pitbull’s, Mike also tells us about more of his ventures other than racing, from tobacco to boxing.
How did Pitbull come onto Mike’s business track and make a Pit-Stop and join him on some of his ventures? What Pitbull songs does Mike listen to in his own car? Is there hope for a #PitbullGirls racing team or get even more extreme, take the gloves off and get our knuckles out to form a fierce fight team?
With special thanks also to Karen Scotting for the head graphics and reaching out. Read more about this charming and remarkable entrepreneur in this exclusive interview below.
Thanks for taking the time to talk to me Mike…
Can you take us back and tell us how the Hispanic Race Team (HRT) came about?
Back before 2000 Census, we saw the Hispanic influence grow. Census confirmed that. We saw most Hispanics were big car nuts – and we love motor sports and driving fast. So it was natural to match to unit Americas fastest and fastest growing sport with the fastest growing segment of the U.S population!
Were there any challenges faced starting up the HRT?
Absolutely, racing is not cheap. Gaining sponsorship for Hispanic drivers is not easy. Especially when corporations limit you to Hispanic marketing dollars, even though we reach all audiences. NASCAR Fans were great however and very accepting and welcoming new competition. 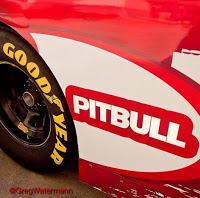 Tell us about a momentous or high point for you with HRT and onwards?
We actually closed HRT in 2004 and began operations as FCV Racing. Short for Fitz, Contreras and Vazquez. The three owners – Armando Fitz, Carlos Contreras and myself.
On the track – in 2006 we won the first NASCAR race by a Hispanic driver, Ruben Pardo at Lime Rock Park, CT. We won numerous awards that year as well. We have had numerous wins in NASCAR Mexico and also, off the track, we have had many special moments contributing to children’s charities and Make A Wish programs. Those we will never forget and hold most dear.
Who is your inspiration in the business world?

It starts with my father, always being honest, upfront and a direct business man- He set the path for me. Then there are young guys like Pitbull who had a vision, a passion and a drive that I can relate to and appreciate.
Where did you meet Pitbull?
I met Pitbull in the 305 many years ago. When he was first starting. We met casually every couple of years or so thereafter around the 305. Then about 6 years ago I was stuck at Mexico’s airport and when I looked up Pitbull was sitting across from me.  We talked for a while that day and met the next day in Miami for lunch to talk about our projects. We have been friends and working on some things together since.

Tell us how you and Pitbull came to work together?
I believe in Pitbull and his message. As well as how he represents Latinos worldwide. So we help promote any projects he has with our race cars and any way we can.
Do you have a favourite Pitbull song you like to jam to in your own car?
WOW! There are so many, a big variety. I love some of the original 305 based music. Old school Pit, but also his new hits- and they keep coming! I’d say the first song I remember thinking this Chico just made some noise and is going up from here with his song ‘Culo’ I remember hearing it with a smile on my face and I said “Yeah…this is Miami-Cuban all the way, and we are now represented!!” 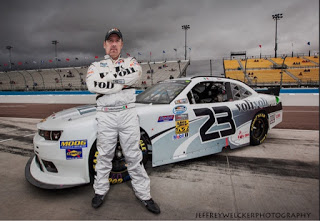 Voli Spirits is one of the sponsors – Do you have a particular way you like to enjoy the drink?
I love my vanilla coffee fusion on ice, with a splash of water..Just a splash!
SLAM School is another sponsor tied in with Pitbull and also the sporting world too. Have you had any of the students over to visit the track or been asked by them to take a car for a spin?
We had some students at the Homestead Miami Race last year. The car was decorated with the SLAM logo and we took the car to the school for the kids. We absolutely love the school, their programs and the kids. Kudos to Pitbull for giving back to our community and the kids in it! 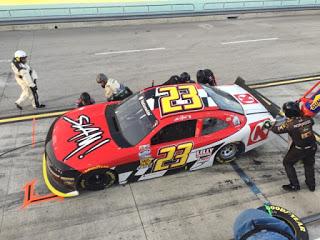 Please may I get behind the wheel of one of your race cars when I’m in Miami (you don’t have to give me the keys!)
Absolutely!  Anytime! Just bring some diapers!
Thanks Mike- and for the warning!  I’ll also make sure I’m insured if you let me take it for a spin  Have you ever let Pitbull loose behind the wheel of one of your cars?
Not yet. Mr Worldwide rarely has a full day off to do it, but anytime he wants to!!
What kind of qualities do you look for and what training is involved in being one of your drivers?
Natural talent, but also a willingness to listen, many hours in the gym and on the track. Having sponsors definitely helps pave the way through!
Do you have many races still ahead of you this year?
We have at least 6 more in NASCAR and working on some more in a different series, IMSA Porsche Races later this year.
Do you give drivers a pep talk or ‘steer your drivers’ towards for motivation before races?
Of course. We go over a game plan and coach them not to be distracted if we work away from it. As a spotter I am in their ear all race long!
So for those of us who aren’t familiar with the racing world, tell us what a spotter does?

A spotter is who speaks to the driver through his radio during the race. We coach as to what’s going on in the race, team strategies etc. But also and possibly more important, we tell the drivers what’s going on around them and let them know when another car is in the blind spot and when they have successfully cleared another car on the track.  Since they can only see roughly 90 degrees in front of them. We are their eyes and ears during the race.
Do you ever get nervous watching races?
Yes, but I can only worry about what I can control, and in racing, most of it is out of our control. Especially the other competitors. We do have a 15 minute rule after the race as well where we cannot approach another driver or team – Let’s everyone cool down a bit. Doesn’t always work though!
Do you have any words of advice for anyone thinking of pursuing a career as a race driver?
STAY IN SCHOOL!  Then if you really want to race, do some Go Karts and work your way up!  Don’t blow all your money or your parent’s money either.  Go get sponsors!…and start small!!
From a tobacco company, HRT, FCV to BYB, your portfolio is almost varied as Pitbull’s! Tell us more about BYB (Back Yard Brawls)…
It’s a new series I am proud of, BYB Extreme Fighting Series.  It brings fights back to their origins, before boxing gloves that are proven to cause more damage!  (Check out the links below)
You were also featured in Magazine Key Biscayne’s 2012’s Most Beautiful People feature, how did that feel?
I felt silly to be honest, but my wife (Arelis Vazquez) was also selected too so I had to do it  (laughs) 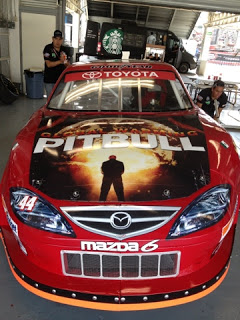 I have a question from a great #PitbullGirl and huge fan of yours, Karen Scotting, that is “Who is your favourite #PitbullGirl?”
HA!…It would have to be her, but don’t tell her – that’s our secret!
Is a PGRT – Pitbull Girl Race Team an option for the future?
Sounds good to me. Or you can be our Back Yard Babes at our next BYB event!
That’s a good one! So what’s next for you?
Working on our next BYB (Back Yard Brawls) event! More information coming soon!  And some more racing…and getting our SENECA cigarettes in more chain stores across the country!  Always working hard, having a good time and only worrying about what I can control.  Such is my life!
It’s been an absolute pleasure, thanks for taking the time to talk to me Mike and share more with us fans. Remember to give me a call when you open applications for PGRT and Back Yard Babes! We’ll have to check in with Mr Worldwide to see if he’s free the same day for a day on the track!
Anytime..Thanks for your support!
All the best for your future projects and thank you again.
(photo credits: Greg Watermann, Jeffrey Welcker. Reposts: Mike Vazquez, Mike Calderon, Unknown sources)
LINKS
Follow Mike Vazquez on Twitter at @MikeFCV
Back Yard Brawls
Web  www.Bybextreme.com
Twitter  @BYBExtreme
Facebook  bybextremefightingseries
Instagram @BYBExtreme
Voli Spirits (over 21’s) www.VoliVodks.com
SLAM School  www.SlamMiami.com
Make a Wish Foundation www.wish.org 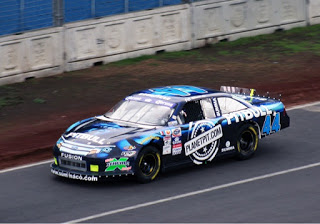