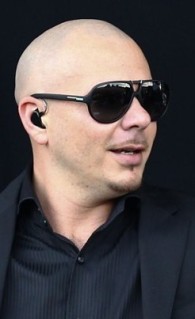 As featured on Planetpit.com 10th July 2012
Sing it! ” Welcome to London where it rains ‘n’ rains…if it ain’t about the weather we complainin’ ’bout the trains…..Where we got a lot of heritage and history….and the Tower Of London’s full of ghosts and mystery, (hey!)…Where we love our music tireless and rock a three day festival like Wireless!…” Umm..That’s all I got folks!
The latest downpours of rain couldn’t even dampen our spirits and how could it with a three day music festival like Wireless with a top dog in London town?
From Calle Ocho many years ago to Dubai just over a week ago and now in a muddy field in London’s Hyde Park this weekend gone. Must you ask “Is he really Worldwide?…..Eeer YES?!”
There was a time when festivals were perceived by many as dirty and not so attractive as a venue and conjured up images of people building human pyramids in the middle of a field coated in rain and mud, associated only with a certain hardcore genre of music and definitely not an attraction to Stateside, elite, artists. My oh my, how things have changed!
Pit is always on the look out for the next new thing, clearly saw the opportunity and bit and locked into it. It may not be Glastonbury BUT it is ‘appropriate’ and covers a crowd that enjoys a wide range of music from one extreme to another, which is perfect for Pit as he does not want to be pinned to one music genre box anyway! In fact Mr Worldwide had recently praised the Brit’s diverse taste in music and how they can listen to pretty much anything ( ….I’m proudly waving the Union Jack flag in the air at this point!)
In his trademark black suit and shades, Pit brought so much energy and excitement when he appeared onto the stage and ‘Get’s it started’ and it was almost as if the sea of people were roaring… “We’ve been waiting for you Mr World Wide!!!”
Our Pit surely rocked it first at the Capital FM Ball and now Wireless and had the crowd go, well, completely nuts! Especially when Pitbull brought out Ne-Yo onto the stage and drove the audience into a frenzy with ‘Give me Everything tonight’, his first UK No1. Very appropriately in line with the typical weather conditions Pitbull also belted out Rain Over Me as well as other hits such as Hotel Room, Back In Time, Hey Baby, International Love and more.
Pitbull’s band did a terrific job as did his official DJ Chino who also had Hyde Park going after wowing the crowds with an amazing set at Anaya the night before. I had the pleasure of briefly meeting him just after his set at DSTRKT a few weeks ago, well I actually collared him into taking a photo and talking to me but he’s a nice fellow too, what a star…bet that up!
As I mentioned, Pitbull was also recently at the Capital FM Ball and we have been very spoilt in the UK and had Pit here twice this year. My understanding of Pit’s trail of thought and interpretation of DALE is “Hmmm…D(o) A(gain), L(ovin’) the E(nglish!) “. But we’re a bit greedy and want a full on Mr World Wide concert only this year too please (hint-hint, nudge, wink!)
A lot of fans were very excited to see Pitbull in the UK again in such a short space of time, even the build up to the festival was too much excitement to contain. My social network updates were absolutely blown up and apart KraZy by Armando Perezfans (Facebook)/ Pitbull Fans @PlanetPitFans( Twitter) about how excited they were about seeing Pitbull, on almost a daily basis! ‘Nuff Respect!
Oh Yes, listen up Jessie J! Seems like you’ve had a few compliments from (ahem..) a certain canine…How about a collab hey? Get your people to call his people or his people to call your people or whatever it is you people do!
At the end of the day Mr World Wide proved he doesn’t need to be plugged in to any particular genre and can go ‘wireless’ and still make a connection anywhere in the world, even a rainy muddy field in London!
Dale! EEEEEEEYAW!