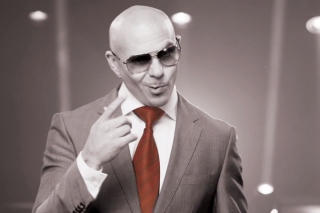 As long as Pit got his suit, shades and red tie, looking so handsome my oh my, he can certainly show his fellow rappers a few thaaangs! What a feel good video, hey folks? Black, white with a tinge of brown sees Pitbull working his own twist of the monochrome look, which is popular this season. Going in line with the lyrics as we ‘seen him with his red tie, tied up’ his neckwear is also something that stands out distinctively throughout the video.
Enjoy the journey as Pitbull takes you on a whistle stop tour of some of his concerts ranging from India to Madrid where you can feel the buzz, energy and ‘lift’ from the other side of the screen as he performs before screaming crowds of fans. You also get to see some of the behind the scenes images and get a feel for the climax building up before Pitbull reaches the stage. Hanging out with his team, a quick shot of him writing a song, whilst also showing us the big equipment containers that are required for the gig. By the way how many microphones were there piled up right at the beginning Pit?
There is a part of the video that has managed to etch itself into my memory and one that makes me glow inside and just smile, that is the moment where Pitbull is on a jet and it’s as if you’re sitting behind him on the plane and he’s looking out of the window to the left and gives a little laugh and smile.
Pitbull is also then caught under the legal act of Don’t Stop The Party as he walks casually down stairs straight out of a jet with what I can only guess is a glass of Voli taking the party to the outside too!
Try not to blink or stick your eyelids up to your eyebrows so you can’t (I’m joking, don’t try this at home kids!) and you may just catch one of my favourite images of Pitbull creating an ad-hoc studio in a hotel room and recording a song with the mattress up against the wall and another where he is recording with his headphones and laptop. PITBULL I REALLY REALLY REALLY would LOVE to watch you record and mix with your laptop and watch the master at work please. To see the magic of your lyrics and beats unfold. I get you, I get your lyrics, I get your music and it’s one of my dreams and things to do on my list before I hit the next milestone age! …. I’ll be quiet as a mouse I promise! I just wanna feel THAT moment.  I think ‘you’re a genius, I mean brilliant!’
The Feel This Moment video is directed by another genius called David Rousseau who also directed Back In Time and Don’t Stop The Party to name a few, (that’s another gentleman whose mind I would like to get into and explore the creativity that goes on behind the scenes of his thought process!). True to the sample of the song Take On Me, David Rousseau takes parts of the video back to the 80’s in true AHA sketch-like style of the video of the original song. And of course, capturing the red tie to the eye so very appropriately in line with lyrics.
And as for Christina? Christina you are responsible for making some of us become a little deluded into thinking that we can sing as amazing as you at the top of our lungs I JUST WANNA FEEL THIS MOMENT, WhOOooOHoH!…each time we see the video, think about or hear the song! Our favourite genie in a bottle Christina Aguilera looks smoking hot with big blonde hair and dressed in a black leather jacket, stylishly zipped. Christina belts out the all the note’s as they should be with her powerful trademark vocals. Christina, we’ve missed you! Welcome back!
The video gives you a still, warm, happy, pink fuzzy feel inside as you get enticed into creating and feeling the moment for yourself whilst being captured and captivated by the song and visuals yet at the same time out of nowhere you also get that burst of energy that makes your body want to dance! How’s that for a versatile mix!
I can’t help but sense that both in the video and song there might be an element of Pitbull himself feeling the moment of when he performs, the travels, and perhaps a moment of private reflection where he is possibly enjoying and appreciative of his achievements from all the hard work. Also of the love and support received from his friends, family, the fans that stand in front of him cheering him on and of course proudly of Team Pitbull as he sings  “I break down companies with all my peeps” And really stops to take all the emotions in while he is on the stage performing away.
“Let’s stop time and enjoy this moment” Pitbull reminds us how to see the future but also not get so caught up in it that you don’t live for the moment and let things pass you by. That life is precious and to enjoy those moments that are life itself ‘but until the gates are open.’  Make sense don’t it? As Pitbull once said “When I say ‘Feel this Moment’ it is basically, feel life, don’t live life for a moment, live life for life, that is your moment”
Pitbull have you ever heard of the Ready Brek Kid in the cereal commercials from the 80/90’s? Because each time I watch this video or listen to the song I feel like I’m starting to light up and glow just like him because it feels so good inside.
FEEL THIS MOMENT ? Yes I’m feeling it!
Daleeee YeeeeOW!
Serina- Pitbull Fan Unleashed!