The official video footage of the biggest bank heist in downton Miami has just been released.

As the elevator doors open in the banking hall, it’s all about to kick off! Enter the classy, sassy, kick ass-iest bank robbers you have ever seen in suspenders, stockings, heels and lipgloss (well how else would you dress to rob a bank in style?)

While the average bank robber probably find their mom’s old nylon pantyhose/tights and chuck it over their faces as disguise ( most likely in a nude or tan shade!) these super sexy ladies do it with fishnets & firearms. Gunshots in the air, everybody down-you’ve just been TMBO’d! 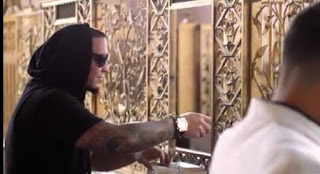 As The Most Bad Ones interrupt DJ Chino trying to do his banking and quite possibly screaming “WINNING” at the bank teller, the robbery proceeds with the ladies getting Mohombi a bank manager perhaps to open up the safe as they bundle the cash into bags. Taking off on motor bikes by now at night with what appears to be the police in a high speed pursuit through the streets of Miami straight to Pitbull who is waiting by the side of the ocean. ( far from the boss but at the end of the day not only owning it all but without getting his hands dirty- We ‘luurve dat’)
But wait! What’s this? By the end of the video it’s evident that the robbery was an inside job. Wisin and Mohombi played their roles in the bank and part of the staged pursuit.

Hats off to the Baddest dancers and bank robbers around. Michelle, Adriana, Kristin, Teena, Ashley, Stef -you ladies do with style and sass!  The Most Bad Ones got the dinero ching-ching for Mr Worldwide, Mohombi and Wisin!

The ladies may not have been arrested but the video certainly arrests the viewers attention. Directed by Daniel Duran, the video tells an action packed story and it’s refreshing to see The Most Bad Ones with an exciting, prominent role in the video.
Moral of the story? Teamwork makes the bank robbery work-great job! Now if you could just tell us your current location ( $305K ahem!)
Dale -eeYaw!