Serina Apr 8, 2014 2 Comments
Put your flags up in the sky and show ’em where you’re from! Lil’Chico Armandito from Miami is flying the flag for everyone on the globe which sitting in the palm of his hand. 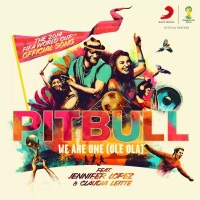 The official World Cup 2014 song scores a ‘hat-trick’ with the trio of Pitbull, Jennifer Lopez and Claudia Leitte. Produced by Dr Luke, We Are One has the stronghold to be able to reach and connect to all whatever genre is a preference on normal basis. There’s something in there for everyone, and that’s what the theme is about. The world and togetherness.  We Are One is led by Mr Worldwide who introduces ‘Jenny’ and later on Brazilian star Claudia Leitte who adds even more flavour with lyrics in Portuguese.

Evoking a light, happy, summery Brazilian vibe amongst other Latin flavours, a great carnival and party feel. You don’t need to be in Rio to capture the feeling! Feel the surdo, malacacheta to the chocalho at certain points and whistle through the song.

The official video as well as the live performance at the opening ceremony is something to look forward to. ‘Don’t talk about it, be about it’ as Pitbull says. It was only a matter of time until Mr Worldwide captures a one of the biggest worldwide events in his net.
Put your flags to the sky, shake ‘n’ samba that ass – wave it side to side – just do what you feel!
Obrigado Pitbull, Jenny and Claudia
Pitbull I salute you! Goal!
Dale EeYAW!
Serina – Pitbull Fan Unleashed